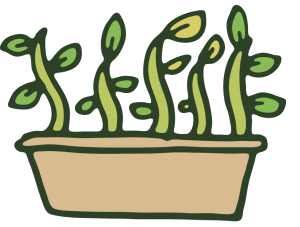 Sexual plant propagation is the recombination of plant genetic material to for a genetically unique individual. This generally involves the floral parts of a plant, pollination that results in the formation of seeds, and starting plants from seeds.

Asexual plant propagation uses vegetative parts of the plant to make a clone, or an exact genetic copy, of the parent plant. This can have several advantages, including the ability to replicate genetically the parent plant. In most cases, it allows for plants to be grown to a size suitable for transplanting in less time than from seed. Also, certain plants produce seeds that are sterile or have poor viability, which makes sexual propagation difficult or impossible.

“Dividing” plants involves splitting or cuttings plants into separate pieces in which each new piece has a complete set of roots, stems, leaves, and growing points. This technique is most commonly done with herbaceous perennial plants.

Read more at How and When to Divide Perennials, from the University of Minnesota.

Parts of plants removed from a parent plant and rooted to form new plants are called cuttings. Cuttings can be classified according to the nature of the cutting material removed (herbaceous, softwood, semi-hardwood or hardwood) or the part of the plant removed to form the cutting. For landscape plants, “softwood” refers to new growth in the current season; semi-hardwood is succulent but partially matured tissue from the current season’s growth, usually taken in late summer; hardwood cuttings are taken from woody plants during dormancy in late fall or early winter. 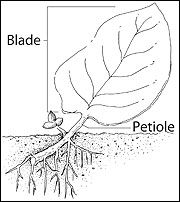 Leaf cuttings include only a leaf blade or the blade and a portion of the petiole (Figure 2). Leaf cuttings first must form roots and later shoots. Depending upon the species, it can take several months to produce a plant suitable for transplanting from a leaf cutting. 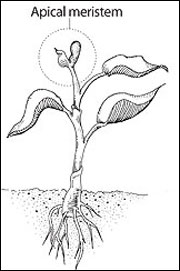 A stem-tip cutting is one in which the apical meristem and at least one fully expanded leaf is taken from the mother plant (Figure 3). After new roots form, there is already an active meristem waiting to grow, which speeds the process. 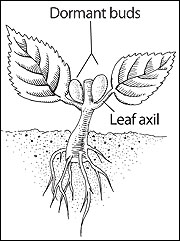 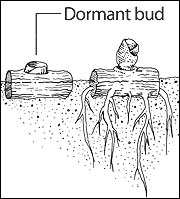 A section of the stem without leaves, but with dormant buds, is rooted in a porous growing medium (Figure 5). This type of cutting is popular to use with plants that exhibit a cane-type of growth, such as dieffenbachia (dumb cane).

Cuttings should be 4 to 6 inches in length and taken from vigorous, healthy plants. Remove the cutting from the mother plant with a sharp, clean knife. Use a rooting hormone that contains a plant-growth hormone such as IAA, IBA or NAA to improve the rooting percentage and encourage more vigorous roots. Rootone® and Hormodin® are two popular choices that are available commercially. Always use rooting hormones according to label directions.

Cuttings should be placed (stuck) in a propagation medium that retains moisture, yet is porous. Do not allow the medium to dry out. Commercially, moisture is usually provided by a misting system. Home gardeners can use clear plastic bags to accomplish the same goal. After sticking, place the cuttings in a warm location between 75 and 80 degrees F to hasten rooting.