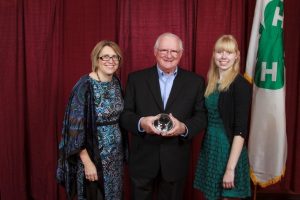 The Wisconsin 4-H Hall of Fame was established to recognize 4-H volunteers, financial supporters, staff and pioneers who made major contributions to 4-H at the local, state and national levels. The honorees represent 4-H in the broadest sense, according to Wisconsin 4-H Youth Development State Program Director Dale Leidheiser.

“We are inducting volunteers, supporters and UW-Extension employees who had an impact on the lives of children, their community or state through significant contributions of time, energy, or financial resource to 4-H and its members,” Leidheiser says.

Wisconsin 4-H is proud to be represented by Jerry Apps in the 4-H Hall of Fame. Jerry began his professional life as a 4-H agent in Green Lake and Brown County. During this time, he met his wife Ruth who was an Extension Home Economist. He then served on the state 4-H staff as publications editor, in staff development with UW-Extension, and as UW-Madison Professor/Department Head in the Department of Continuing and Vocational Education. He also served at the first director for the National Extension Leadership Development Program.

Jerry’s work as an historian has provided the most complete history of the University of Wisconsin-Extension, Cooperative Extension, The People Came First. Jerry frequently appears on public radio and TV. His writing was featured in PBS documentaries: A Farm Story with Jerry Apps and A Farm Winter with Jerry Apps. Jerry’s work has been recognized through numerous awards from the education, history, and literary communities.

Since 1914, Wisconsin 4-H has helped youth grow the leadership, critical thinking and communications skills necessary to be successful in a constantly changing world. Visit the Wisconsin 4-H Hall of Fame website to learn more about the individuals who supported 100 years of growing Wisconsin leaders.