The four watersheds that make up our project range from 10-20,000 acres of farmed land. Three of the watersheds are in the St. Croix River basin and one falls in the Red Cedar River basin. Both basins are impaired by phosphorus. When considering which watersheds to pilot, the project team put more weight on feasibility and potential for farmer-participation than on phosphorus loading hot spots. Essentially, the team determined that creating the best possible conditions for success was more important in developing a long-term model than choosing a watershed based solely on nutrient loading. They picked watersheds with existing farmer-leaders, and with a history of farmer-engagement with county conservation activities.

Recruitment of initial council members happened in two ways. In two of the councils, the coordinator and county staff reached out individually to farmers they already knew and that they believed could be interested. During those conversations, we presented a sketch of the idea, using the example of the Hewitt Creek Watershed work in Iowa. The conversation was not structured in one-direction, rather, we asked farmers about their perceptions of water quality problems in the area, and about the proper role for agriculture. The idea of working proactively and as a farmer-directed group was appealing to many of the farmers, particularly as a possible alternative to increased regulation by DNR or others. Once we had a group of at least three or four interested farmers, we planned an initial meeting, encouraging those farmers to invite one or more other farmers that may be interested.

In the other two watersheds, we took a different approach and sent a letter to every landowner in the watershed (see an example here), inviting them to an introductory meeting at which we described the idea for the project and solicited feedback, comments, and opinions. In one watershed where we took that approach, we had nearly 70 people come to the meeting, which was fortunately held at a local park so space wasn’t a problem. In the other watershed, we had a smaller group of around 15 people attend the introductory meeting. In both cases, meeting attendees were not limited to farmers; many non-farming landowners also showed up. This presented a challenge because the councils are intended to be exclusively for farmers to create a stronger sense of farmer leadership and direction, and to remove farmer/non-farmer tensions. We had to politely inform non-farmers that the councils were for farmers only. Most were very understanding after we explained the rationale. 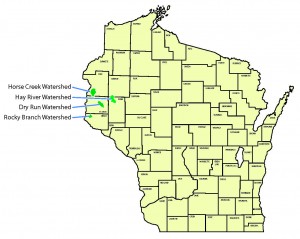